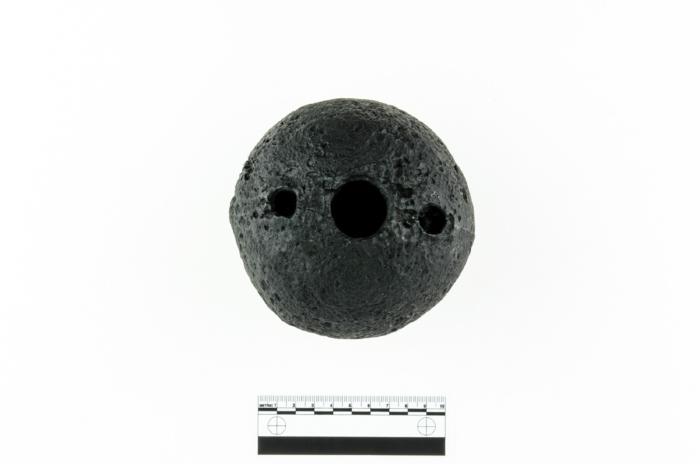 Grenade by The Mel Fisher Maritime Museum on Sketchfab

The 1700 slave ship Henrietta Marie mounted eight cast-iron cannon, and these guns fired solid, cast-iron, round shot. Approximately 75% of the shot recovered from the wreck site are three-pounders, with the remainder being four-pound size. In general, the smaller are approximately 2 ¾ inches, and the larger have a diameter of 3 ¼ inches. These iron balls could be fired with a point-blank range of 150 yards and a maximum range of around 1500 yards. The impact of these solid shot would allow them to damage an enemy ship, while maiming or killing those on board.

One example of “barshot” also comes from the wreck. This piece consists of two round shot joined by a short iron bar. This piece was to be fired from the cannons just like the other shot. It was designed, though, to whirl through the air and cut a greater swath than a simple ball would. Barshot was especially effective at destroying rigging and sails, but it could kill more effectively, too.
A hollow, cast-iron sphere from the Henrietta Marie, 5-inches in diameter, is a hand-thrown weapon called a grenadoe. It is one of four examples found on the wreck. These hollow balls were filled with gunpowder, which was ignited via a fuse set in a wooden plug that filled the large, center hole. (The two smaller holes cast along either side are where the ends of an arching, iron handle were set.) These devices were a forerunner of the modern grenade. An eighteenth-century marine dictionary says of these weapons: “The sailor fires the fuse with a match, and throws the grenadoe as directed: the powder being inflamed, the shell instantly bursts into splinters that kill or maim whomever they reach on the decks of the enemy.”