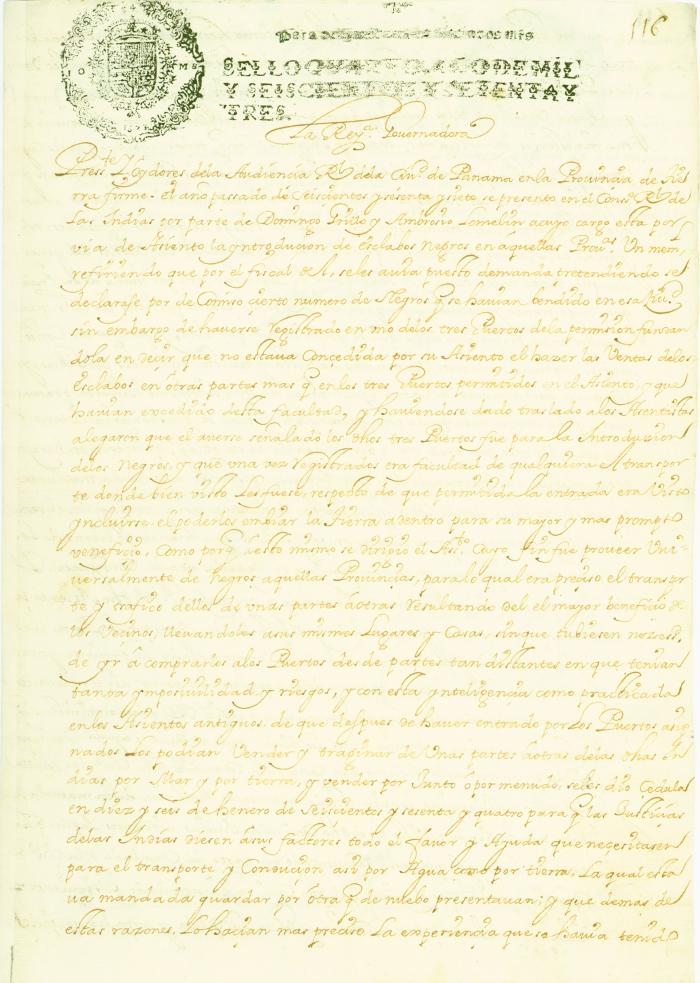 “To the Court of Panama that executes what was agreed in that year [1667] to allow the factors of Domingo Grillo to introduce Black slaves inland.” A royal directive regarding the Asiento, signed in Madrid by Queen Mariana, July 3, 1673.

The Asiento was a contractual agreement between Spain and individuals, businesses, or other nations to provide African slaves to the Spanish colonies in the Americas. The roots of the Asiento go back to the Treaty of Tordesillas, signed in 1494, which divided the Atlantic and gave Spain the Americas, while Portugal gained the right of trade in Africa. The Asiento system ran for over three centuries, from 1518 to 1834.

In 1663, the Asiento was awarded to two Genoese businessmen, Domingo Grillo and Ambrosio Lomelin. Under the terms of the contract (effective 1668), Grillo and Lomelin were to introduce 24,500 African slaves to the Spanish colonies over a seven-year period. Each year, 3000 were to be sold as the traders saw fit, while 500 were to serve in the shipbuilding industry, and for this right the Spanish crown was to be paid the 100 pesos per African imported. Grillo and Lomelin did not send ships to Africa to acquire captives, but rather, they contracted with the English and Dutch to transfer slaves from Barbados, Jamaica, and Curaçao to designated Spanish colonial ports.

This royal directive, signed by Queen Mariana (regent to her young, feeble son, King Charles II), clarifies for the Royal Court in Panama that the Asiento allowed for slaves to be sold further afield, beyond the agreed to ports of Cartagena, Portobello, and Vera Cruz. The document notes that “…commerce [in slaves] consisted of sailing for the said three ports, which were giving impracticalities to take Blacks [there] because of the multitude of pirates who were cruising those seas, and not allowing them to enter without the obvious risk of being apprehended without going in armed vessels…” The order does say, though, that despite the risks, those holding the Asiento still had to enter a designated port. After that, “They will be able, after having introduced and registered the Negroes by the ports of Cartagena, Portobello, and Veracruz, bring them to sell to where they decided to introduce them in interior lands and transfer them to any parties in this manner, as by land and water.”