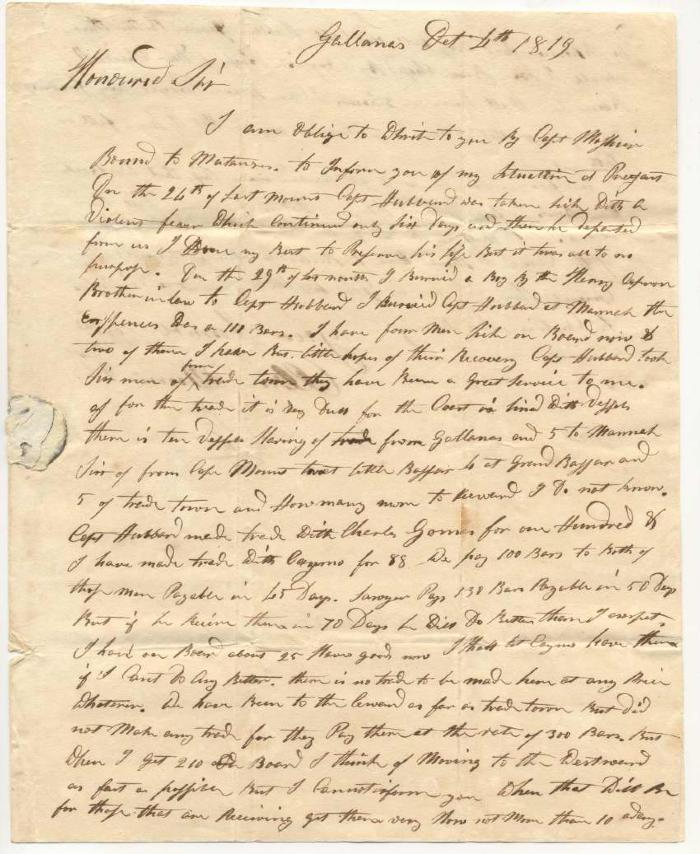 On an October day in 1819, a nineteen-year old sailor named Allen Munro was sitting aboard the slave ship, Cintra, tied up in the Gallinas River in what is now modern-day Liberia. From there he wrote to his employer in the United States announcing that, because of the death of the original captain, he had been forced to take charge of the ship. He was also offering his assurances that he would strive to ensure the success of the voyage, despite having already experienced many frustrations.

At the time the letter was written, the maritime slave trade was illegal and covert, so his letter also discloses many generally unrecorded issues surrounding such clandestine voyages. By deciphering Munro’s difficult scrawl, carefully appraising its content, and drawing out the larger story from the evidence it provides, the letter reveals aspects of the persons, economics, geography, and hazards involved in the buying, selling, and illegal shipping of African slaves at that time. In this letter addressed to the venture’s owner, a Capt. James Dooley in Bristol, Rhode Island, Munro wrote:

I am oblige to write to you by Capt Moshier bound to Matanzas, to inform you of my situation at present on the 24th of last month Capt Hubberd was taken sick with a Violent fever which continued only six days and then he departed from us I done my best to preserve his life. But it twas all to no purpose. On the 29th of last month I Buried a Boy By the [name] Henry Lefron Brother in law to Capt Hubberd I buried Capt Hubberd at Mannah the expenses was a 110 Bars. I have four men sick on Board now & two of them I have But little hopes of their Recovery Capt Hubberd took from six men of/from trade town they have Been a great service to me. As for the trade it is very dull as the coast is lined with vessels there is ten vessels slaving of trade from Gallanes and 5 to Mannah six of from Cape Mount two at little Bassa 4 at Grand Bassa and 5 of trade town and How many more to leward I do not know. Capt Hubberd made trade with Charles Gomes for one Hundred & I have made trade with Cenzano for 88. We pay 100 Bars to Both of those men Payable in 45 days. Sawyer pays 130 Bars Payable in 50 days But if he receives them in 70 days he will do Better than I expect. I have on Board about 25 slaves goods now. I shall let Cenzano have them If I Cant do any Better. There is no trade to be made here at any price whatever. We have Been to the leeward as far as trade town But did not Make any trade for they Pay them at the rate of 300 Bars. But When I get 210 On Board I think of moving to the Westward as fast as possible But I cannot inform you When that Will Be for those that are Receiving get them very slow not more than 10 a day. The schooner sail very well and Capt Hubberd offered Better than usuall I have Been Chased By a English sloop of War Which I ran her Hull down in three hours I can [illegible] longer my [illegible] or any craft that I have seen here or any one that I have fell in with yet. I don’t fear any Body except I get Becalmed near a ship that has Boats three Boats or four will not take me that is if my men will stand decks. I shall do my Best for the safety of the vessel and the presavation of the cargo. I should wish to receive a letter at Trinidad at my Arrival there I am in good health at Present and in hopes to continue the Journey