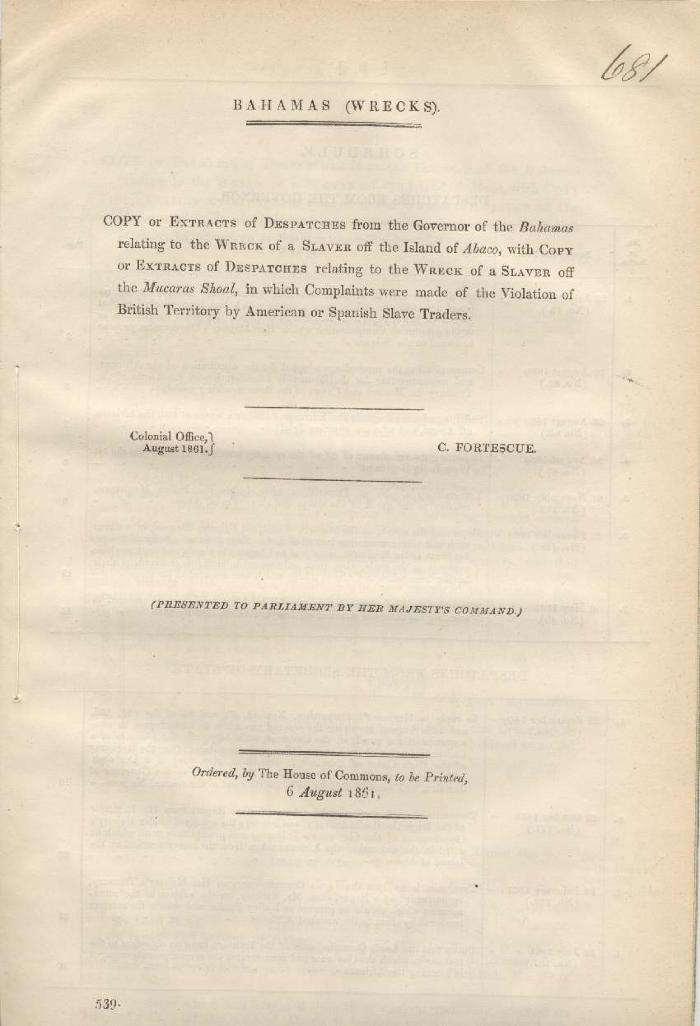 On the morning of July 25, 1860, a ship ran aground at Lynyard Cay in the Abaco Islands in the Bahamas. The vessel proved to be the New Orleans-based Peter Mowell, a 129-ton schooner that was carrying nearly 400 African captives from the Congo River and headed to Cuba with the intent of selling them there. The Bahamas were a British possession and, since the transatlantic slave trade had been abolished by the British in 1807, the U.S. in 1808, and Spain in 1820, this was in defiance of the law.

Three Africans were killed in the collision, but 389 survived, along with the crew of eight, The following day, Bahamian wreckers came to the aid of the survivors and eventually took everyone to Nassau. There, the crew was jailed, while the Africans were delivered to the custody of the colonial government and given any necessary medical treatment.

In the British colonies of 1860, slavery itself had also been abolished, so there was no question of putting the newly-arrived African refugees in bondage. With no way to return them home, questions arose as to what was to become of them in the Bahamas. Almost immediately, twenty-one of the young African men were conscripted for military service into the West India Regiment. After much deliberation, Governor C.J. Bayley decided that the other Africans would be distributed to Anglo-Bahamians as indentured servants for a term of six years. It was thought that this term of service would give them a structured transition into the ways of the colony. After that, they would be free to blend into Bahamian society.

Many letters, depositions, expense records, and other documents were generated in the management of the wreck of the Peter Mowell and its survivors. These papers were collected and formally printed by the British government, so the story could be entered into the official government records. This was particularly important because the illegal transatlantic slave trade had suddenly become more active, possibly in response to a sense that harsher penalties for slavers were coming as popular sentiment shifted in favor of the Africans. Having an available record of how the situation was handled would provide members of parliament and other government officials with a blueprint for any similar situations that might soon follow.

These records are very detailed about the shipwreck and the survivors. They tell of the Peter Mowell’s mission, why it wrecked, who the people on board were, the legal situation of the crew, the numbers of Africans and expenses for their care, and debates over the structure of their terms of indenture. These pages are rich in historical information, but they have also been helpful to marine archaeologists in understanding the physical remains of the Peter Mowell. In particular, a letter by Governor Bayley provides a specific location for the shipwreck, and, in 2012, that information was used by a team from the Mel Fisher Maritime Museum and the National Museum of The Bahamas to locate the site in the waters alongside Lynyard Cay.